Over 40 years ago, standing on the edge of Wollaston Lake in northern Saskatchewan, Doug Hill gazed towards the vast tracts of untouched wilderness to the north. Doug had a dream-to bring the incredible trophy fishing and remote wilderness of Canada's Arctic within reach of anglers in the southern towns and cities of Canada and the United States.

Doug was no stranger to the bush. One of Canada's pioneer outfitters, he had established the first lodge on Wollaston Lake more than a dozen years before. But already the hand of man was encroaching on the lake-other lodges were sprouting up and a newly constructed road saw increasing traffic of trailers and RVs from the south. Doug craved wilderness, true wilderness, a place free of roads, telephone poles and tanker trucks-and admittedly, yes-even other neighbors…as few as they might be.

After several exploratory flights in his trusty bush plane, with young sons Rob and Mike diligently casting off the floats to test the waters, Doug settled on Kasba Lake-a huge fish-filled jewel of turquoise water, tundra-covered islands and forested shores in Canada's fabled Northwest Territories. Here, a few old graves and the occasional inukshuk were the sole remaining testament to a time when hunter-gatherer peoples fished and hunted along Kasba's shores. And it was here, under the midnight sun and northern lights, that Doug found a peace and solitude unlike any place he had ever been. One hundred fifty miles north of the nearest road, totally remote and completely untouched by the hand of modern man, Kasba Lake promised future guests not only great fishing but a true wilderness experience.

Transportation, however, was a problem. Kasba Lake could be reached by float plane but this was unreliable, costly and time consuming for his guests. As he envisioned fishermen traveling from cities as distant as the southern United States and even overseas, Doug needed a quicker and more convenient mode of transport. So, in the spring of 1974, with a John Deer Cat flown in piece by piece and assembled on the shore of Kasba Lake, Doug, Rob and Mike set out to build an airstrip.

The following year, in the summer of 1975, the first fishermen landed at Kasba Lake Lodge on a DC-3, which used every inch of the bumpy 3000 ft "runway". During the early days the accommodations were rather-well-"rustic." But the fishing was legendary. As word spread about tiny Kasba Lake Lodge fishermen from far and wide came to experience its extraordinary fishing and unique arctic beauty. To protect the fishery Doug took the revolutionary step of instituting a Catch and Release policy-the first of its kind in Canada.

Over the years the little lodge grew. Outhouses, wash basins and tent shacks gave way to private cabins, maid service and modern amenities. Once forced to navigate Kasba's daunting waters in 14 foot boats with fifteen horsepower outboards, guests soon fished in style from custom boats featuring state-of-the-art equipment, including-what a luxury-real padded seats! And the days of rustlin' up their own grub, too, were soon over. After a long "hard" day of trophy fishing, guests could look forward to the 'Kasba Crew' serving sumptuous home-cooked meals and cool cocktails in Kasba's new lakefront lounge. The family tradition continues today. When at the lodge you will likely see Rob or Mike and their families taking an active part in the Kasba story.

Most importantly Kasba developed a unique style all its own. Maybe it was Kasba's remoteness, which drew people together. The perennial return of guests and staff certainly enabled friendships to bloom. The antics (and angling prowess) of legendary guides like Jimmy St. Germain, Gordo, China and Pegleg Pete added to the character and good times at the lodge. And of course our guests, many of whom have returned to Kasba for many years, contributed greatly to the lodge's history and traditions. Yet there's little doubt that Doug Hill himself contributed the most to the now famous 'Kasba Style'. "Work hard, and play hard…" he always said (and the staff always did). "…But remember: we're all here for one reason-our guests."

Today with Doug in our hearts the Kasba Crew still lives and breathes by these words of wisdom. And whether this visit is your first, fifth or twenty-fifth, all of us at Kasba Lake Lodge sincerely hope you have a wonderful experience and that you can relax and enjoy the unique spirit and beauty of Kasba Lake. Most of all we hope to welcome you back very soon, to share with us the fun, friendships and traditions that Kasba Lake Lodge has to offer. After all, you too are part of our legendary Kasba Style...and the evolving Kasba Story. 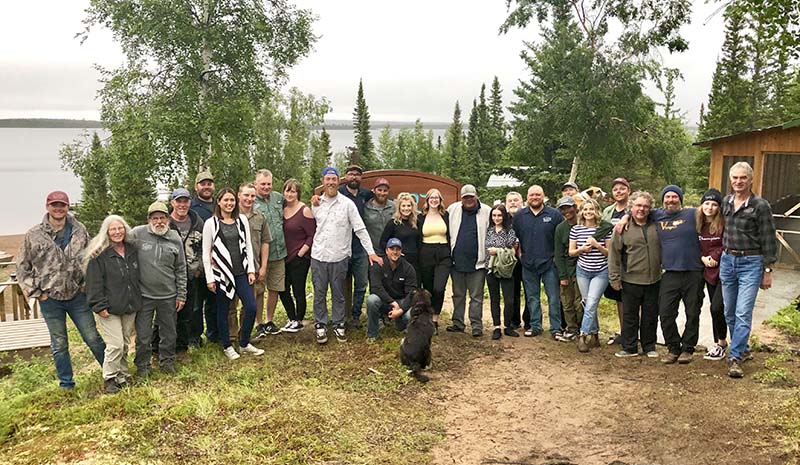